This is what happens to people, who are left idle to themselves—they may start thinking about some irrelevant stuff. This happened to me: I got sick and, under the influence of “Tera Flu,” could neither work, nor sleep. So it got me thinking. And who am I to think about work, while on vacation away from boss (me, when I am not sick, is that boss of mine)? So, not a word about work or law, here, I promise.

Instead, I started wandering off thinking about, what I can improve around myself, what needs my attention, usually occupied by the things we won’t talk about here. What is it that I have to fix, or replace, or add? One by one, I realized I am looking soon at replacing my trustworthy MacBook Air, which serves daily since 2013. It is still a great machine, but its battery is not charging as fast, which to me is a signal that soon it will be gone. Now, battery in this sleek laptop is easily replaceable, (link), so I am safe here. Same relief is about changing harddrives. Phew! But I couldn’t stop my thinking process, and thought then, if dropped or stolen, I will be forced to buy and new machine.

That new machine will be, of course, another MacBook Air. It will be Mac, because I spent 11 years fixing Windows computers, and Apple’s both hard- and software were at that time ions ahead from anything else. I quit in 2008, so may be there is an improvement, but I am not planning on testing it on myself. It will be Macbook, because I work almost exclusively on the go, I have no chance to use a desktop PC. And it will be Macbook Air, because it is lighter, and I am the one who hauls it around. I had full models of Macbooks before, and they are bricks comparing to Air. It also helps that the battery life usually is huge, enough for a day of work.

So, if I am on the market, I reminded myself that Apple dealt away with its magnetic charger plug (MagSafe), and, if that was not enough, also killed all ports in exchange for some mysterious “USB-C,” implemented since 2015.

Now, I think this move was crazy! Anyone who uses any peripherals either have to upgrade (and use just one peripheral), or to get a hub, and walk around with a web of cables and adapters, or let go of the peripherals, or move to PC and other non-mac laptops. But you don’t have to give my personal thoughts any weight. How about the market research, that 40% of macbook users (something I thought to be a very loyal bunch) moved to another platform since 2014?

This is market’s vote by its dollars, and they may go elsewhere. Think about someone like me, a very low-sophistication user, no coding, no gaming, mostly paper and image processing. I use USB sticks to print my docs and give the sticks away when I need to deliver a file. I use ergonomic USB keyboard and mouse, when my hands hurt. I use tethering for running Internet from my phone, via a USB cable, to be online where is no WiFi.  Would I ever imagine dragging around a multiport adapter for all of that? I won’t, and so, apparently, I am not alone. I don’t want to send to obsolesce all my USB stuff either, and I am still tripping over occasionally over my power cord, causing it simply to disconnect. (If you want this feature to remain on a new macbook, buy yet another adapter). And these older devices are not that obsolete, they are still sold, including by Apple. Let’s go the Apple Store of today, and see that they still sell USB and Thunderbolt devices (this, this, this and this, for example). Where, pardon me asking, I am going to plug those to in the new machine?

I used to live in one of the two areas inhabited most of the Apple users (Silicon Valley and Boston were the two as of 2010). I still see mostly MacBooks on the tables in coffee-shops, and I do spend a great deal of my daily time and work in coffee-shops locally in Bay Area. I am yet to encounter one person using any USB-C adapter or dongle, for anything.  In other words, I understand, devices are out there, and available for purchase and carrying alongside your laptop, and may be their makers make a good dollar on those adapters, but I don’t see any widespread use, or even a limited, modern use, of any of those contraptions.

SFist said 3 months ago: “specifically the huge MacBook Air crowd tapping away in coffee shops and campus libraries — may be less pleased to learn that their next computer won't be like their last one, and it will likely be more expensive, too.”

Why less pleased?  I think I covered the possible reasons (and I am not even starting on the now-missing SD slot, which I use weekly at least). Why those changes and burning the bridges? On this topic, I don’t have an answer. People advocate the “future” and the need for early adoption, and how logical it is for us to switch to the newly proposed design, forcing us to have a laptop with just one or two ports.  These advocates do have a point, the same simplification and trimming down on buttons and options works for iPhone (one button, and now not even a earplug outlet), and appears to work for slimmed-down iWatch. These devices’ sales numbers are great. But this success does not translate to laptops. I feel that laptops are a different category of a tool, a different usage experience is expected from them.

It seems to me that the user’s expectation of use, or the utility, of a laptop is different from that of a phone, tablet, or watch. I just can’t bang a solid number of words per minute on an iPad, forget a phone. On the phone or tablet, I can’t conveniently edit a picture in a functional editor (say, Photoshop or a similar app), or complete a document in Word.  Sure, I still can review the file on any device, make a quick comment, send it by email, save, delete, or duplicate. I can browse most of the webpages. But I can’t fully work on it, because I can’t access all formatting options from a phone, and I don’t know anyone who can. Thus to me, the utility of the current laptop is plummeting to nil.

What is left? A great computing power, great graphics, great exterior, and luckily you still get a keyboard and a trackpad. What that all means without options to connect—a very good, beautiful, sophisticated, expensive toy. It will still work for showing off, and it will seamlessly assist its user with what can be done internally within that laptop’s system. For anything else—there is a dongle. 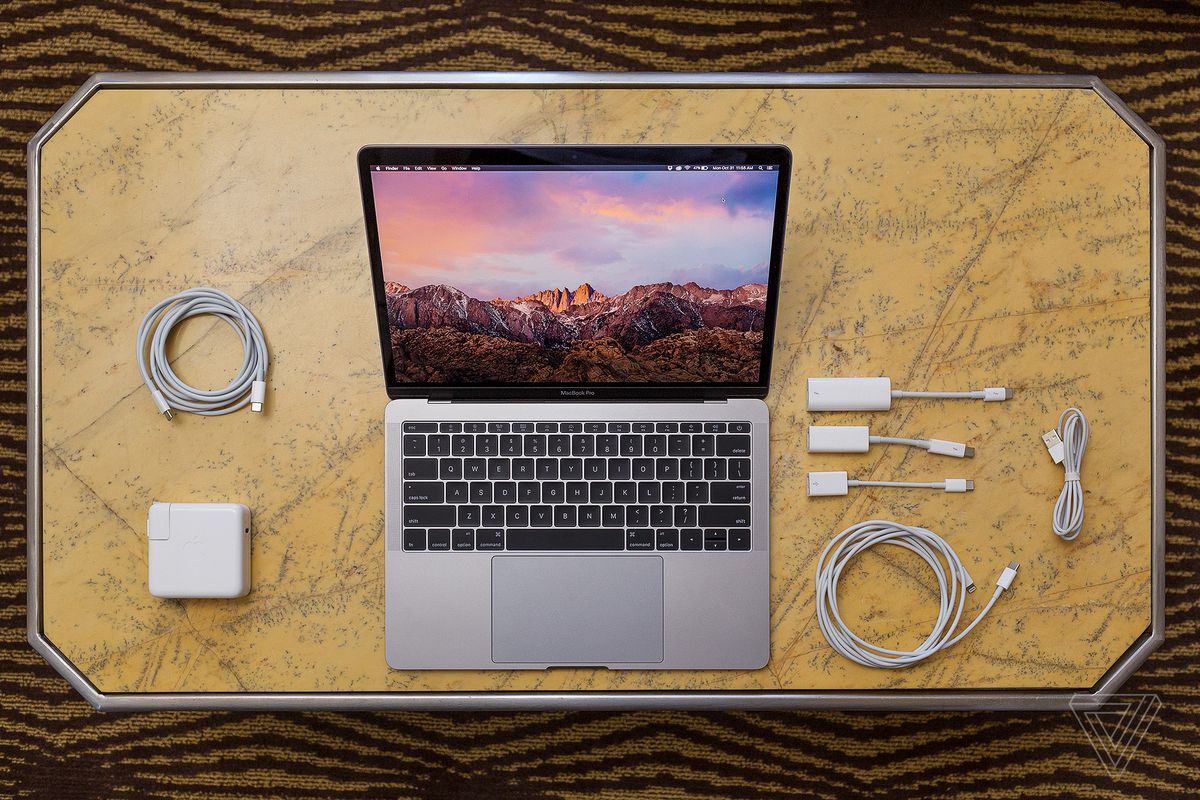 [Picture is taken from this The Verge post].  Yet Apple is doubling down on requiring more dongles! This last cited article rings home for me, because it analyzes the today connectivity in the today’s mobility need. Future is out there, but we will probably go through 2-3 laptops before the future concepts of the one-port and completely no-externals usage will become norm.

In the meanwhile and today, the present-day connectivity and mobility needs are becoming more and more foreign for the new macbook editions. Sure, it may in some near future become widely adopted, but you could buy that one-port machine then, if you want it. What’s the point of torturing yourself today? The Virge article concludes: “for the first time in seven years, I am not sure if my next laptop will be a MacBook.” I disagree! My next laptop still will be a MacBook. Only it will be a 2014 late Macbook Air, the model year when all the ports were still provided. There is still plenty of supply, so no need to worry! And if you paid attention, the battery and hard drive are replaceable! Much relieved!
at 12:30 AM

Email ThisBlogThis!Share to TwitterShare to FacebookShare to Pinterest
Labels: technology